Sometimes I like to noodle around on instruments while I’m thinking. It used to be a Takamine 12 string acoustic guitar with only 6 strings on it, but last month I let myself be decadent and bought an old Rickenbacker 4001. In my book, those are the best bass guitars ever made, built so well, so simply, and with a purity of spirit that I can really relate to. Still made in California by a tiny shop of luthier nerds too. Neat.

I used to own one, but I sold it when I decided to make sounds of my own design, and rebel against the idea of being forced into playing some kind of rock and roll instrument that was wholly invented by a manufactured construct that was trying to kill any creativity in music.

Yeah, I was kind of dramatic back then.

I’m listening and doinking around, and then I hear someone saying that it sounds like Seinfeld. Ouch.

Anyhow, I kinda missed playing a bass guitar, so I allowed myself to buy one last month. And like I said, sometimes I play it to help me think. I have my calluses back and everything. 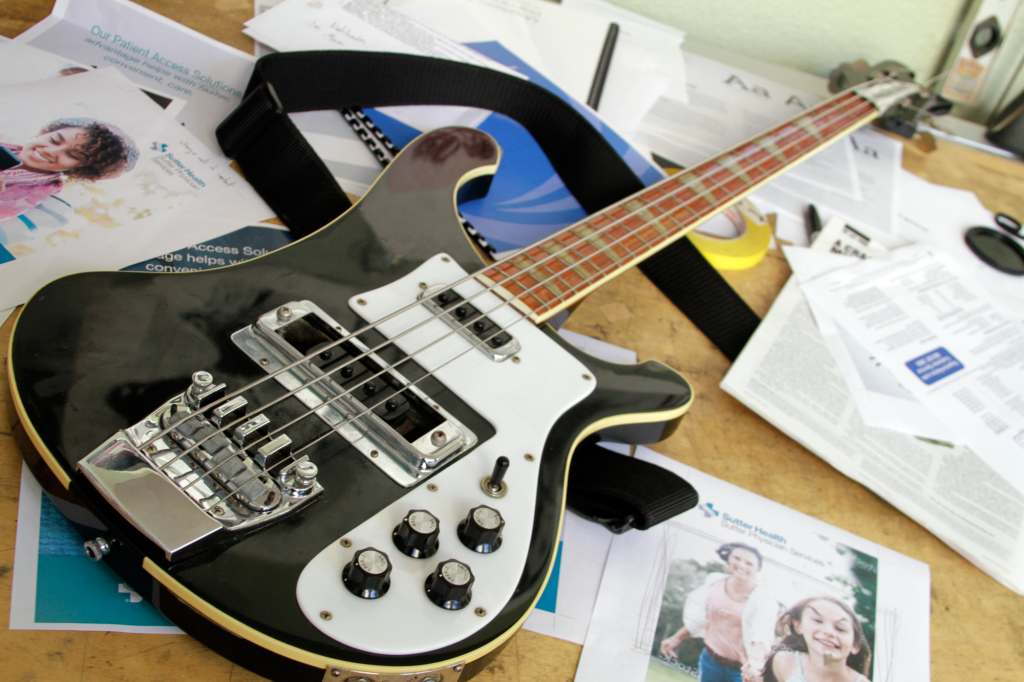 It blends right in with my usual drafting table mess

So today, I was on a conference call with a client, along with one of their vendors that they are using to implement part of the project we are working on.

We got through the section of the discussion that I was taking part in, and I could have jumped off the call but I wanted to sit in for the rest to get a better idea of the full scope of the project.

So I put down the speaker phone, hit MUTE, and started doinking around on my bass guitar.

I’m listening, and doinking, and then I hear someone on the phone say “Is that hold music?”

Apparently, I suck at mute buttons. I stopped playing and never admitted to anything.