Tonight, I’m working late and doing some research on a new campaign for a client. Three words are driving the ideas so far – movement, optimism, and prosperity.

So naturally my mind goes right to images of supersonic monorails, rocket flights to Paris, and the unbridled enthusiasm embedded in advertising statements like “Better Things for Better Living…Through Chemistry.”

Anyhow, I stumbled across this amazing article from a Popular Mechanics article written in 1950. Apparently in the year 2000 New York to San Francisco will only take 2 hours, a steak takes 8 seconds to cook, and housework will be a breeze since furniture is made of plastic and can simply be hosed down.

The article did get a few things right though; Nobody in 2000 sees any sense in building a house that will last a century and it is sometimes hard to tell where one city ends and another begins.

Note: the article below is slightly edited; the stuff about power plants and nuclear reactors was pretty long-winded. Enjoy the future! 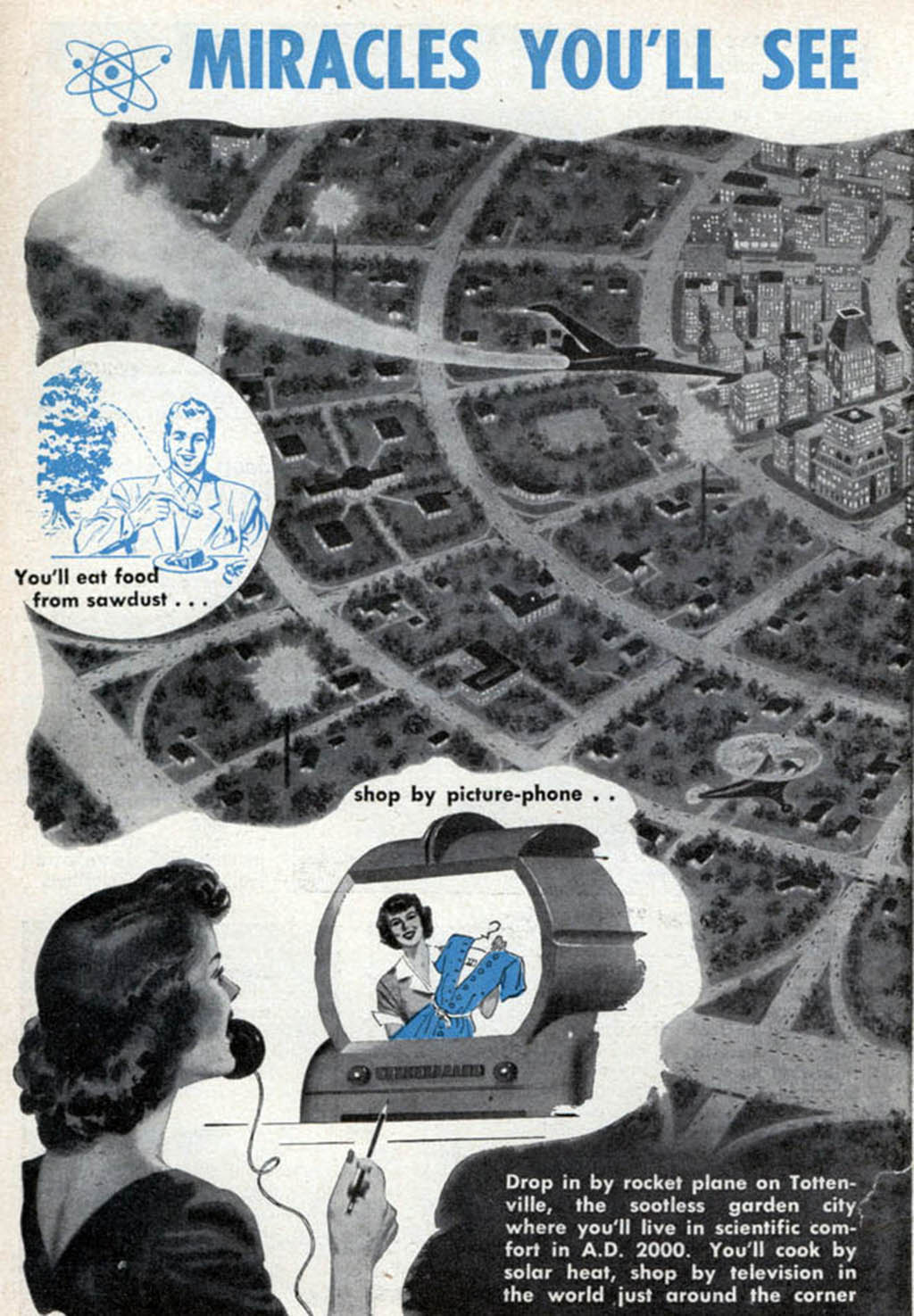 Miracles You’ll See In The Next Fifty Years

What will the world be like in A.D. 2000? You can read the answer in your home, in the streets, in the trains and cars that carry you to your work, in the bargain basement of every department store. You don’t realize what is happening because it is a piecemeal process. The jet-propelled plane is one piece, the latest insect killer is another. Thousands of such pieces are automatically dropping into their places to form the pattern of tomorrow’s world.

You don’t realize what is happening because it is a piecemeal process.

The only obstacles to accurate prophecy are the vested interests, which may retard progress for economic reasons, tradition, conservatism, labor-union policies and legislation. If we confine ourselves to processes and inventions that are now being hatched in the laboratory, we shall not wander too far from reality. 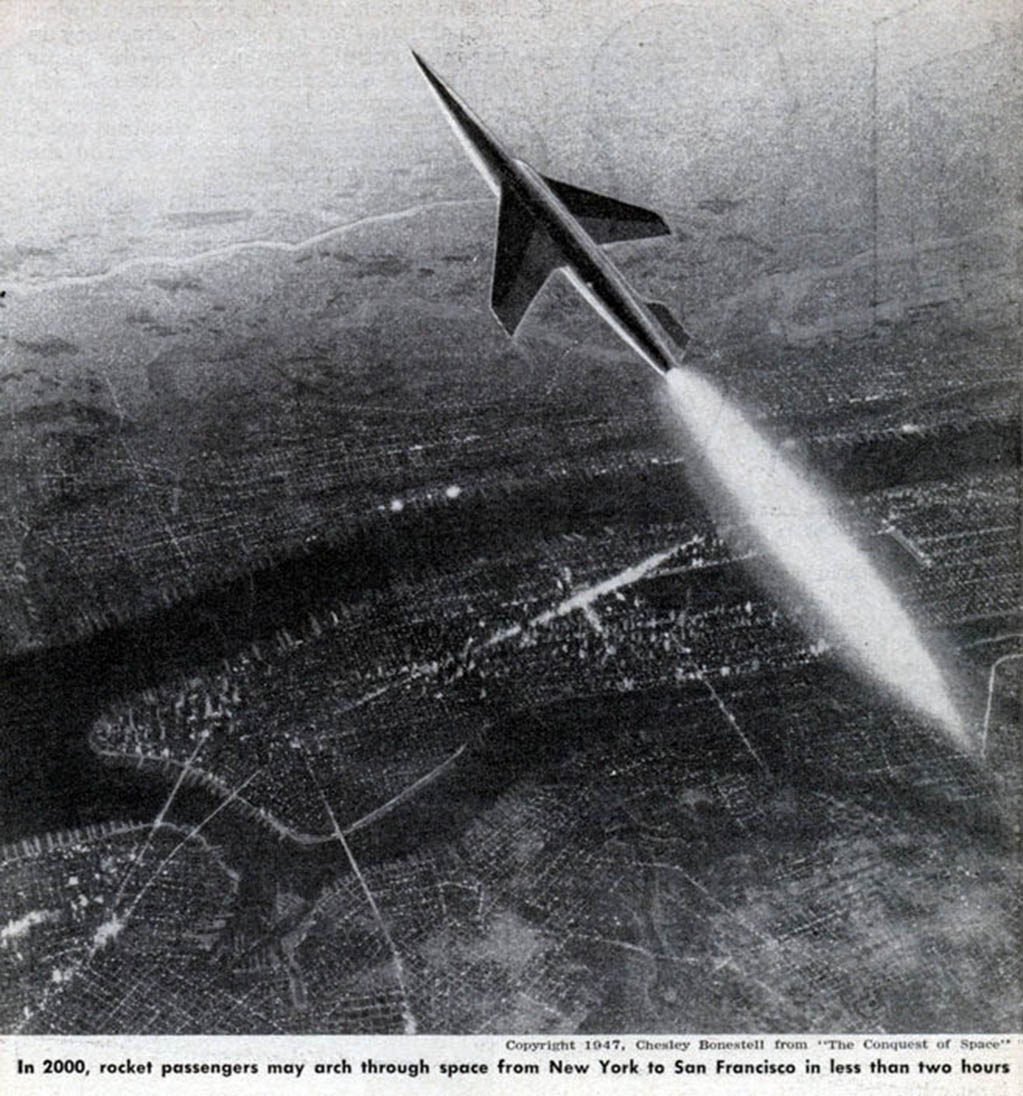 The best way of visualizing the new world of A.D. 2000 is to introduce you to the Dobsons, who live in Tottenville, a hypothetical metropolitan suburb of 100,000.

There are parks and playgrounds and green open spaces not only around detached houses but also around apartment houses. The heart of the town is the airport. Surrounding it are business houses, factories and hotels. In concentric circles beyond these lie the residential districts. 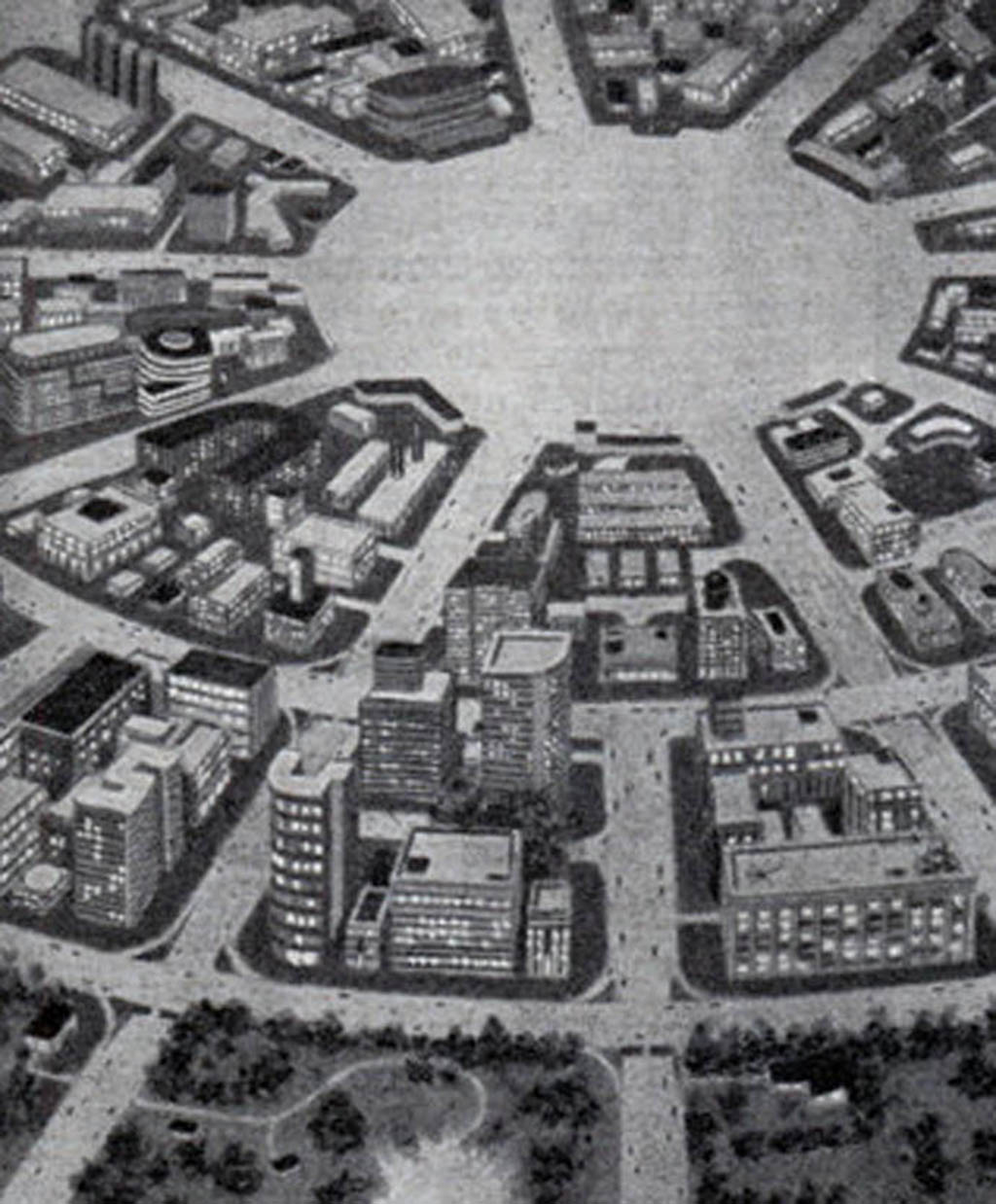 The highways that radiate from Tottenville are much like those of today, except that they are broader with hardly any curves. In some of the older cities, difficult to change because of the immense investment in real estate and buildings, the highways are double-decked. The upper deck is for fast nonstop traffic; the lower deck is much like our avenues, with brightly illuminated shops. Beneath the lower deck is the level reserved entirely for business vehicles.

Tottenville is as clean as a whistle and quiet. It is a crime to burn raw coal and pollute air with smoke and soot. In the homes electricity is used to warm walls and to cook. Factories all burn gas, which is generated in sealed mines. The tars are removed and sold to the chemical industry for their values, and the gas thus laundered is piped to a thousand communities. 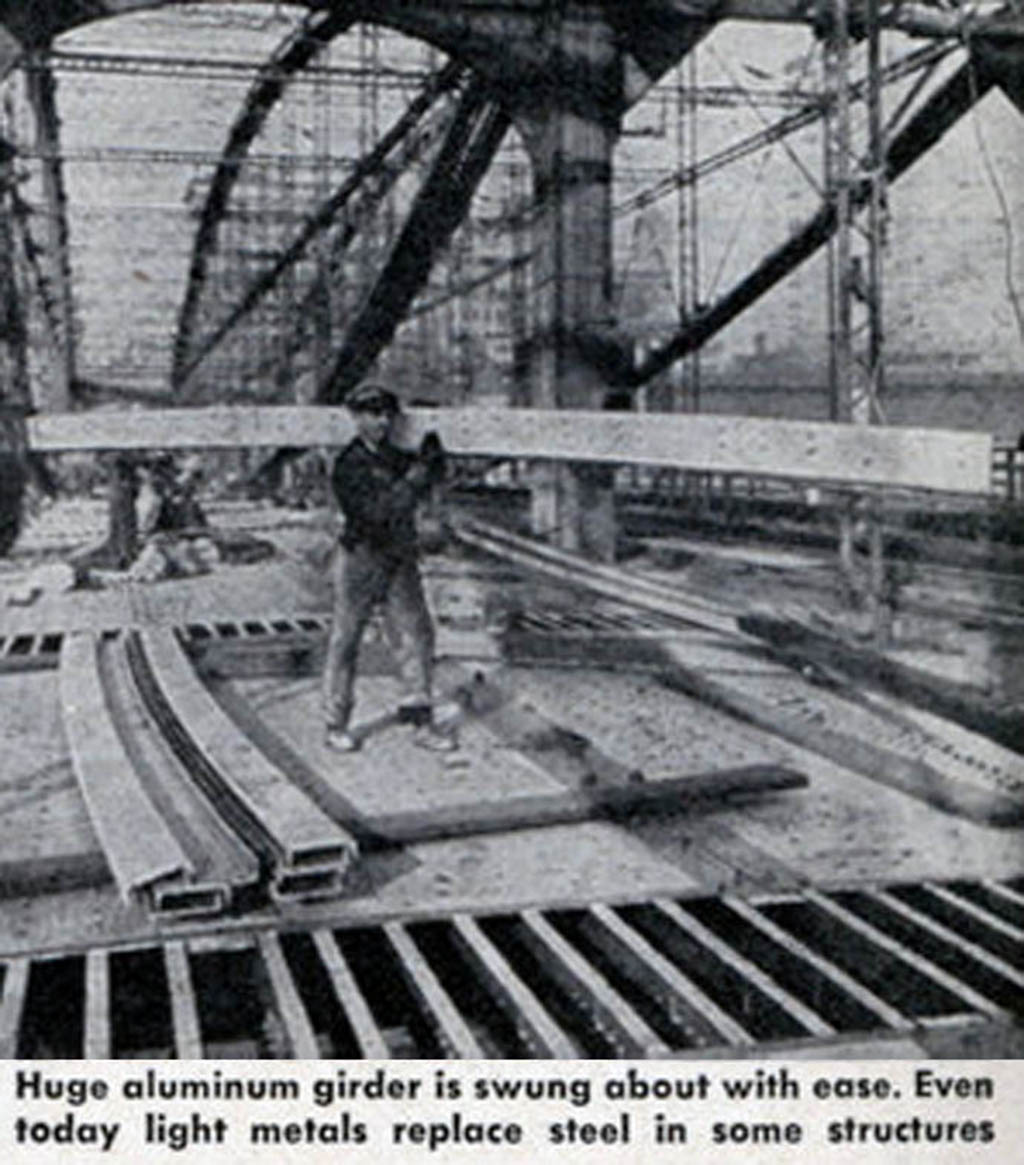 The metallurgical research that makes the gas turbines in the power plants and in the trans-Atlantic liners possible has influenced both civil engineering and architecture. Steel is used only for cutting tools and for massive machinery. The light metals have largely displaced it. Ways have been found to change the granular structure so that a metal is ultrastrong in a desired direction and weaker in other directions.

By the year 2000, wood, brick and stone are ruled out because they are too expensive.

As a result, the framework of an industrial or office building or apartment house is an almost lacelike lattice.

Thanks to these alloys, to plastics and to other artificial materials, houses differ from those of our own time. The Dobson house has light-metal walls only four inches thick. There is a sheet of insulating material an inch or two thick with a casing of sheet metal on both sides. 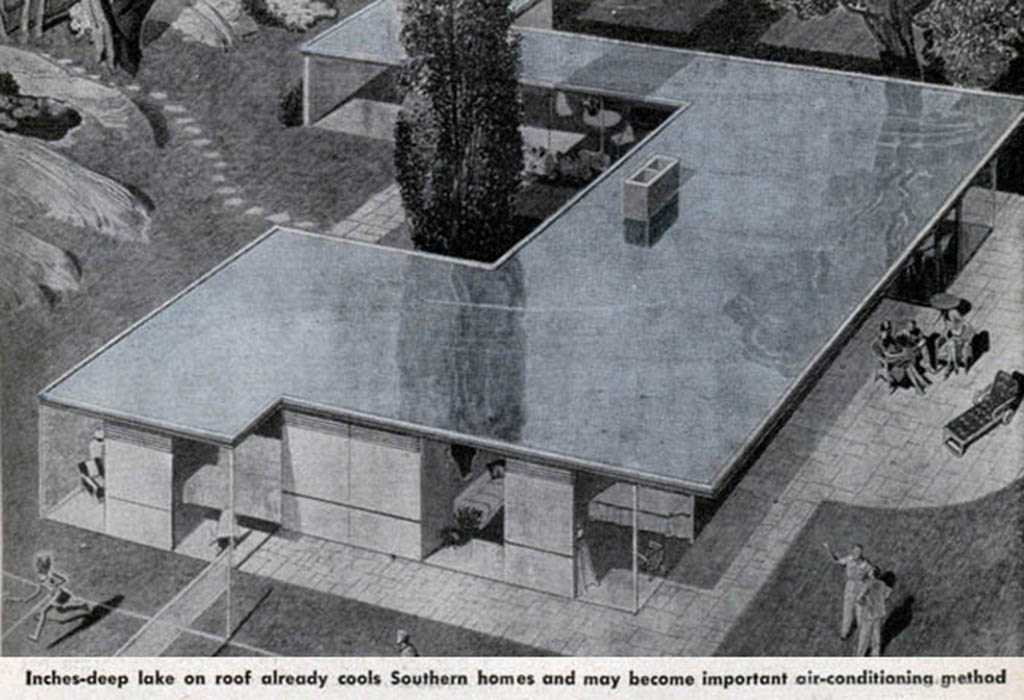 This Dobson air-conditioned house is not a prefabricated structure, though all its parts are mass-produced. Metal, sheets of plastic and aerated clay (clay filled with bubbles so that it resembles petrified sponge) are cut to size on the spot. In the center of this eight-room house is a unit that contains all the utilities – air-conditioning apparatus, plumbing, bathrooms, showers, electric range, electric outlets. Around this central unit the house has been pieced together. Some of it is poured plastic – the floors, for instance. By 2000, wood, brick and stone are ruled out because they are too expensive.

It is a cheap house. With all its furnishings, Joe Dobson paid only $5000 for it. Though it is galeproof and weatherproof, it is built to last only about 25 years. Nobody in 2000 sees any sense in building a house that will last a century. 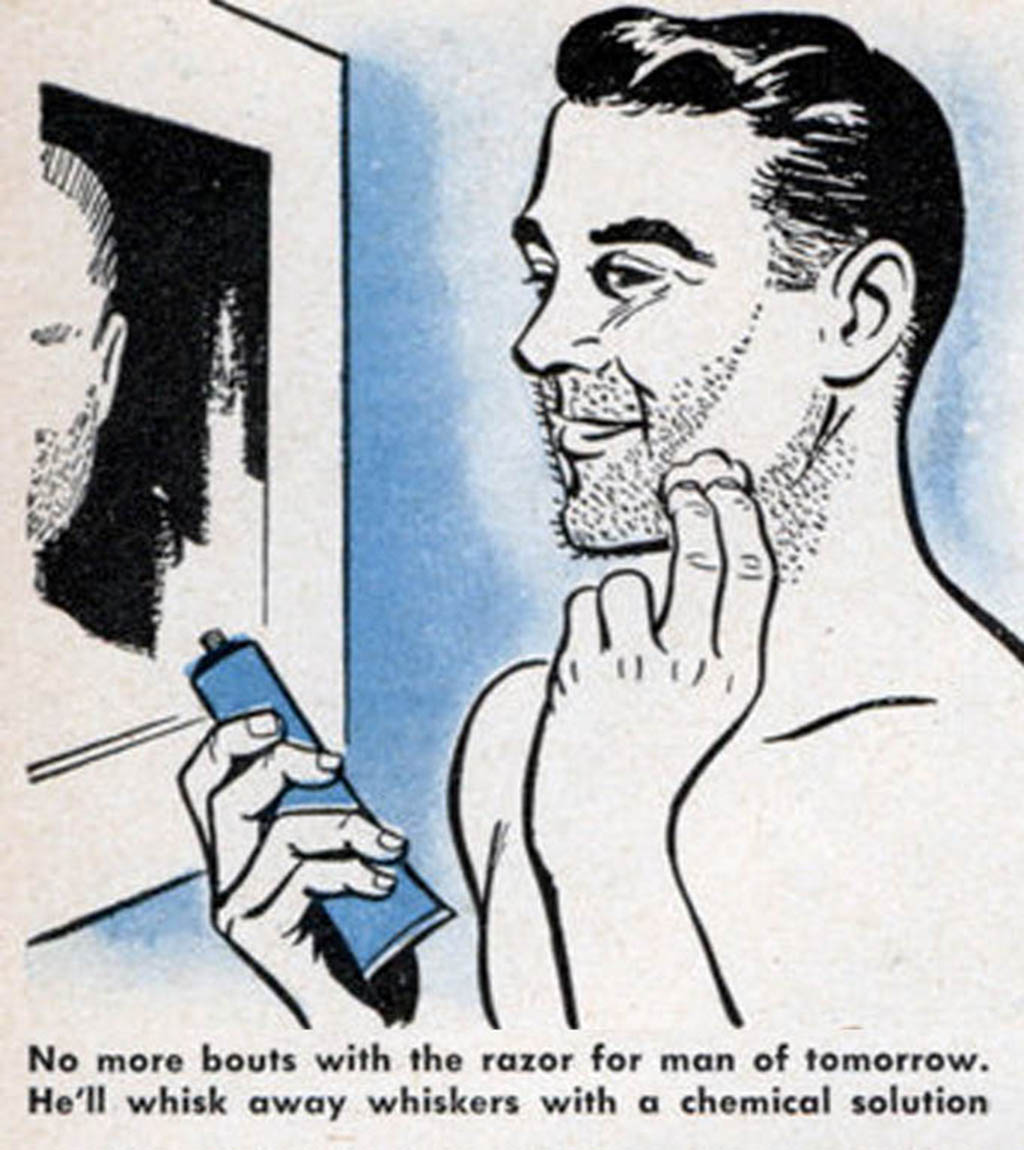 Everything about the Dobson house is synthetic in the best chemical sense of the term. When Joe Dobson awakens in the morning he uses a depilatory. No soap or safety razor for him. It takes him no longer than a minute to apply the chemical, wipe it off with the bristles and wash his face in plain water. 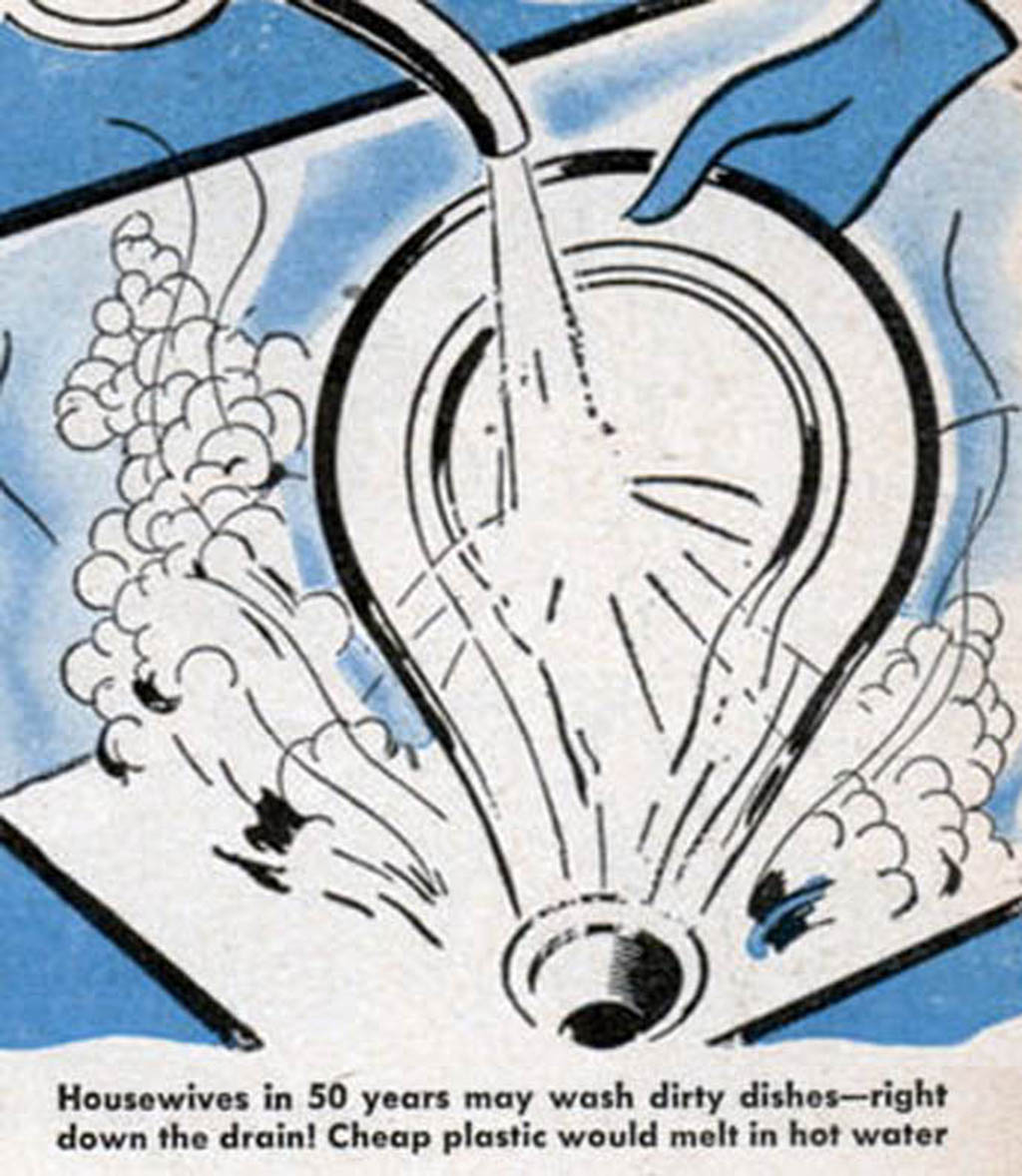 This Dobson house is not as highly mechanized as you may suppose, chiefly because of the progress made by the synthetic chemists. There are no dish washing machines, for example, because dishes are thrown away after they have been used once, or rather put into a sink where they are dissolved by superheated water. Two dozen soluble plastic plates cost a dollar. They dissolve at about 250 degrees Fahrenheit, so that boiling-hot soup and stews can be served in them without inviting a catastrophe. 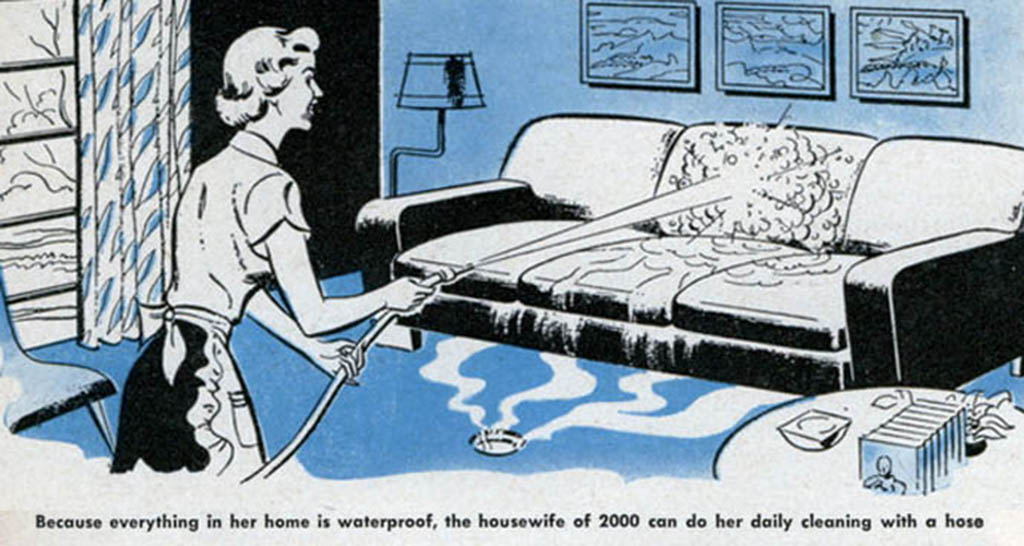 When Jane Dobson cleans house she simply turns the hose on everything. Why not? Furniture (upholstery included), rugs, draperies, and unscratchable floors are made of synthetic fabric or waterproof plastic. After the water has run down a drain in the middle of the floor (later concealed by a rug of synthetic fiber) Jane turns on a blast of hot air and dries everything. A detergent in the water dissolves any resistant dirt.

Tablecloths and napkins are made of woven paper yarn so fine that the untutored eye mistakes it for linen. Jane Dobson throws soiled “linen” into the incinerator. Bed sheets are of more substantial stuff, but Jane Dobson has only to hang them up and wash them down with a hose when she puts the bedroom in order. 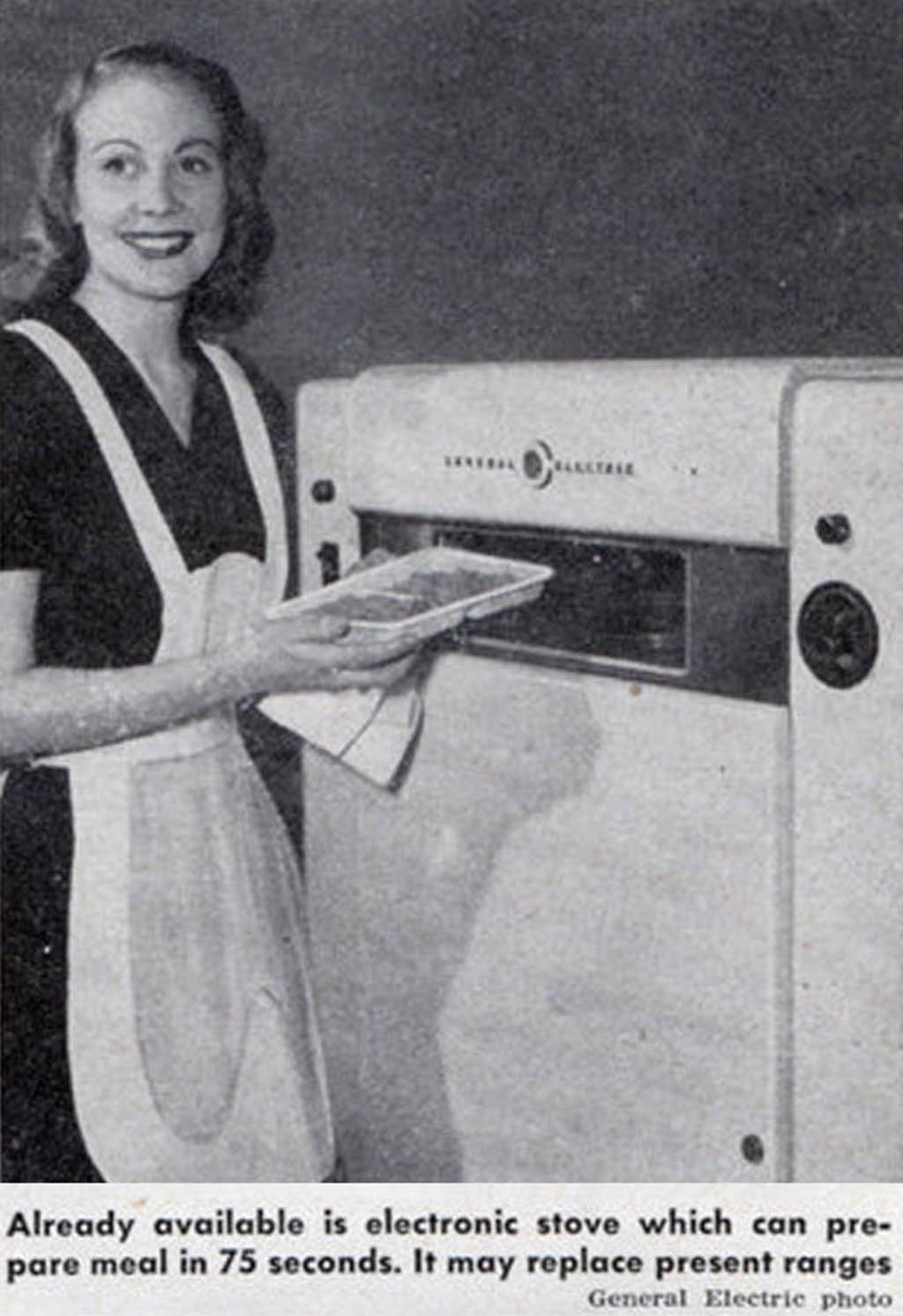 This expansion of the frozen-food industry and the changing gastronomic habits of the nation have made it necessary to install in every home the electronic industrial stove which came out of World War II. Jane Dobson has one of these electronic stoves. In eight seconds a half-grilled frozen steak is thawed; in two minutes more it is ready to serve. It never takes Jane Dobson more than half an hour to prepare what Tottenville considers an elaborate meal of several courses.

Cooking as an art is only a memory in the minds of old people. A few die-hards still broil a chicken or roast a leg of lamb, but the experts have developed ways of deep-freezing partially baked cuts of meat. Even soup and milk are delivered in the form of frozen bricks.

Some of the food that Jane Dobson buys is what we miscall “synthetic.” In the middle of the 20th century statisticians were predicting that the world would starve to death because the population was increasing more rapidly than the food supply.

By 2000, a vast amount of research has been conducted to exploit principles that were embryonic in the first quarter of the 20th century. Thus sawdust and wood pulp are converted into sugary foods. Discarded paper table “linen” and rayon underwear are bought by chemical factories to be converted into candy. (Umm wow – a new meaning to the phrase “eat my shorts”)

Businessmen have television conferences. Each man is surrounded by half a dozen television screens on which he sees those taking part in the discussion.

Of course the Dobsons have a television set. But it is connected with the telephones as well as with the radio receiver, so that when Joe Dobson and a friend in a distant city talk over the telephone they also see each other. Businessmen have television conferences. Each man is surrounded by half a dozen television screens on which he sees those taking part in the discussion. Documents are held up for examination; samples of goods are displayed. In fact, Jane Dobson does much of her shopping by television. Department stores obligingly hold up for her inspection bolts of fabric or show her new styles of clothing.

By 2000, supersonic planes cover a thousand miles an hour, but the consumption of fuel is such that high fares have to be charged. In one of these supersonic planes the Atlantic is crossed in three hours. Nobody has yet circumnavigated the moon in a rocket space ship, but the idea is not laughed down.

This extension of aerial transportation has had the effect of distributing the population. People find it more satisfactory to live in a suburb like Tottenville, if suburb it can be called, than in a metropolis like New York, Chicago or Los Angeles. Cities have grown into regions, and it is sometimes hard to tell where one city ends and another begins. Instead of driving from Tottenville to California in their car (teardrop in shape and driven from the rear by a high-compression engine that burns cheap denatured alcohol) the Dobsons use the family helicopter, which is kept on the roof. The car is used chiefly for shopping and for journeys of not more than 20 miles. The railways are just as necessary in 2000 as they are in 1950. They haul chiefly freight too heavy or too bulky for air cargo carriers. Passenger travel by rail is a mere trickle. Even commuters go to the city, a hundred miles away, in huge aerial buses that hold 200 passengers. Hundreds of thousands make such journeys twice a day in their own helicopters.

Any marked departure from what Joe Dobson and his fellow citizens wear and eat and how they amuse themselves will arouse comment. If old Mrs. Underwood, who lives around the corner from the Dobsons and who was born in 1920 insists on sleeping under an old-fashioned comforter instead of an aerogel blanket of glass puffed with air so that it is as light as thistledown, she must expect people to talk about her “queerness.” It is astonishing how easily the great majority of us fall into step with our neighbors.

And after all, is the standardization of life to be deplored if we can have a house like Joe Dobson’s, a standardized helicopter, luxurious standardized household appointments, and food that was out of the reach of any Roman emperor?