Advertising is a struggle. I beat myself up on just about every project I’m involved with, because what I’m really trying to create is lasting art, not just loud-mouthed marketing to sell people crap they don’t need. It really is challenging though – the froofy grand ideals of creating art in mass media is often at odds with the real world of client approval, deadlines, and target audiences that maybe aren’t going to respond to what I think is “art”. You’ll understand why I’ve introduced my forehead to my drafting table many times. Bonk. 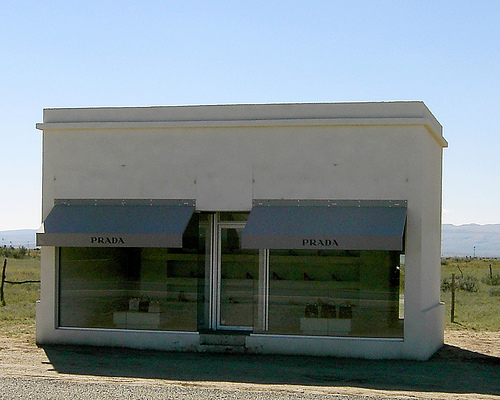 Anyway, the point. Of this post, not of everything. I love the sculpture in the photo to the left. It’s better than toast, better than a hula-hoop, even better than eating food on a stick. It’s a faux Prada boutique built in the middle of the Texas desert. It’s got real product inside and it never opens for business. It can’t, there’s no functioning door.

This thing was built in 2005 out of adobe bricks and other organic materials, so maybe it’s gone now I’m not sure. From the sculptor’s statement:

As we purposefully will not preserve Prada Marfa, it will eventually become a ruin so that even in a future decayed state it will remain relevant to the time in which it was made, Fall 2005, precisely because it has aged.

I think the real point of this sculpture, and what gives it relevance to what we do, is that Prada commissioned it. That to me is the real drama of the piece. Well that, and the fact that aliens are shopping there.

…TOOK A PICTURE OF YOUR PRADA SHOE STORE..AND THOUGHT WE SAW ALIENS WEARING YOUR SHOES INSIDE ONE SMALL ALIEN FIGURE LOOKED TO BE CARRING A PRADA HANDBAG…WHEN I CHECKED MY CAMERA LATER TO VIEW THOSE PICTURES THEY WERE GONE…

Like I said, even better than food on a stick.

Boards Of Canada
Over the Horizon Radar